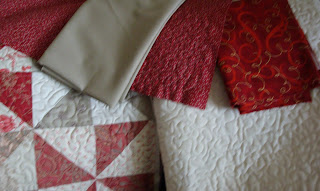 Yesterday I got two runners quilted. I concentrated on trying to keep the stitching a little tighter and think its improving....so, I got ambitious and decided to try silver metallic thread on the next one. It did not join the completed pile because I spent most of the night taking all those little meandering stitches back out. All the tutorials I read/watched on free motion said to check the back often to see whats happening there... and now I know why! The silver was pulling and breaking on the back and was a MESS! I was going to include a picture of
the rats nest of thread that I pulled out, but, my darling daughter threw it away and it already had leftover spaghetti and coffee grinds dumped on it... figured you could do without that sight! 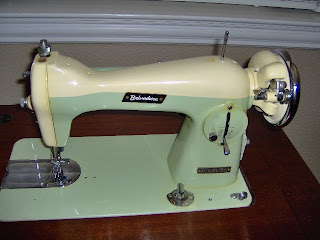 Today I am going to take my new babies to the sewing machine doctor for a check up. I got these two beauties at the local Goodwill over the last couple months. The green one is in a cabinet that is in great shape and I paid $15. It does not have a belt or a bobbin casing, but the motor runs and the mechanism works using the hand wheel so I don't expect major issues. From what I have found, this is made in Japan post WW2 and is a Singer clone, probably 15-81. Its so pretty! 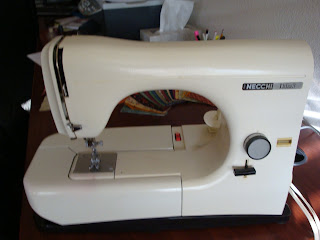 This white one is a Necchi, made in Italy in the early 1950's and I picked it up for under $30 (didn't want to wait for the markdown and chance it being gone). I have plugged it in and it works great and it came with a carrying case. Online the rap on these is that found machines have tend to have gunked up and require lots of oil and TLC to get moving, but this sweetie runs like butter, but... I want to get a general tune up as I have this fear of sewing on it and having something dramatic like gooo leaking on my project :)

It is pure coincidence that the sewing machine doctor I am taking these to is located in the store in the industrial area I went to earlier in the week.... if they happen to still have some of the lime damask left, I think it will be coming home with me :) I also might find my way over to Goodwill and see if there is anything worthy of my small but growing mid century sewing machine collection :)

Have a great weekend!
Posted by Diane at 9:23 AM