What have I been doing? 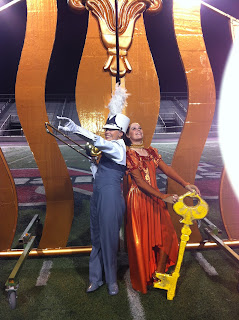 If you have visited my blog previously you may have seen something on my daughters being in High School Marching Band which is a big deal in Texas. One plays trombone and the other is in Colorguard, the group that adds visual dynamic to the show performances with flags, rifles, and this year spinning keys.

The flags were my area, I lead the team of almost 40 that assisted in cutting, gluing and sewing  the 275 flags that we made this year. (only about 5 of them sewed) 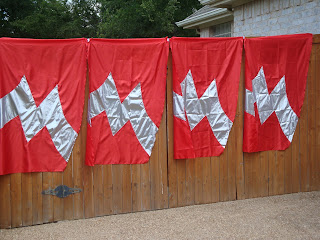 We started in July with new flags for the half time entrance, fight song and parades... these were easy peasy...  red china silk and silver lame, only three pattern pieces, a good warm up... 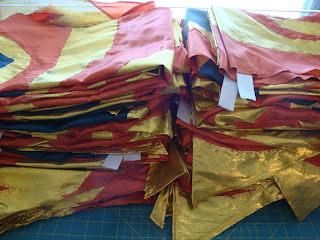 Next were the first show flag, these not so easy due to the swirls and the points.  The fabric must be cut with a hot wood tool since it frays so easily, this fuses the edge a little and reduces the repair work 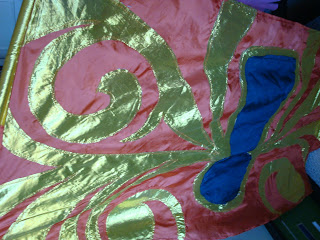 theoretically that is... this is a flag in for repairs after a game before use in a show the next day.  If you have worked with lame you know it frays if you look at it funny, so imagine what it does in 25 mph wind gusts on a 6 foot poll. 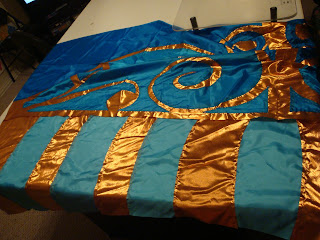 Theses were the flags that almost did me in... those little swirls are only about 3/4 inch wide and the flag in total is 6 1/2 feet wide and 7 1/2 feet long from point to point. 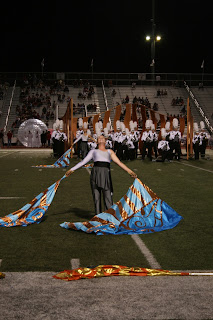 There are 38 girls, two flags each plus an extra set, that is 78 of these flags 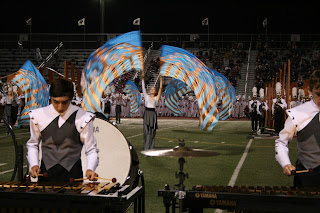 They are beautiful, a full out gasp filled the stadium the first time they were used.
In case you think I have been loafing, that the above does not sound like much, there are three other sets of flags that were made as well but I can't share them yet as they have not been used in a full performance.  There is a band superstition that you don't show anything till its used... 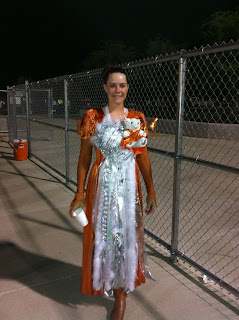 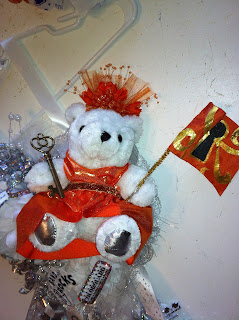 And just for fun, I made my daughter a flag for her Mum... if you don't know about Texas Homecoming Mums, they are quite the BIG deal.....  Hers is small....
So, that is what I have been up to.  Today I will complete the LAST flag and although I have enjoyed this project and love to support my daughters activities, this is one I am happy to see completed....  did I mention that last year the team made a total of 36 flags and this year we made over 275?
Posted by Diane at 9:32 AM