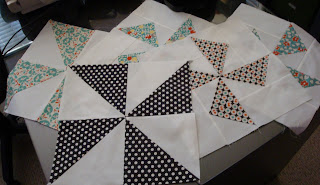 When I updated my layout I also updated the buttons I was carrying and got rid of the ones that were no longer relevant. I am still carrying the Pinwheel Quilt Along button because I am still working on the darn thing :)
When I looked in the bin that I had the Pinwheels in I found I had been deluding myself that I was over half way done. In actuality, I had 6 (3 sets) done. I had cut out the rest of the blocks that Rachael provided tutorials for, making a total of 14, and I decided that I wanted 20 blocks total, so I got set up for the remaining blocks. Of course I picked the easiest blocks to make duplicates of, and these are the 4 that I got done yesterday. 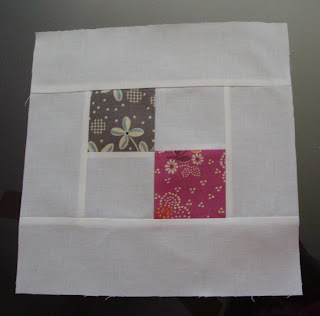 All of this came about because I wanted to start on a new quilt along hosted by Crazy Mom Quilts. I have been hanging on to a jelly roll and a charm pack of Hope Valley since they came out and had not found a reason to cut, but this seemed like the perfect project for them. I had also just picked up 4 yards of one of the basket weave prints on sale so I had the backing ready to go!...

only problem is that I could not in good conscience start another quit along when I had two that were in progress (way behind in progress). I rationalized that the postage stamp quilt along was a life long project and I could not be held accountable for completing it. That left the the pinwheels for which I had no excuse other than a loss of momentum.

This left me in a moral dilema that I negotiated as follows: I can start the new quilt along, but, as I had just completed the active project I was working on, the pinwheels went to the front of the line and were now the official project in progress.

Twisted I know, but it works for me :)

Best part is neither required the additional purchase of material!