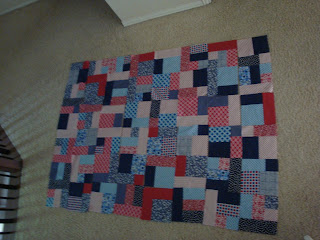 This is what it was going to look like.

But then I made nice little stacks of blocks and used nifty pins to mark the top and sides, started sewing and after the third row was done realized that I had somehow switched dirrections and mixed up the blocks.
SO... I now had 8 rows of 3 blocks done. I went ahead and set those aside, picked up my piles and sewed 2 together, leaving the third. I figured I had already layed them out so these blocks belonged together.
I ironed the sets of 3 and 2 and then took them back to the open area I have to use (since I don't have any wall space for a design wall) and re-layed the blocks... a set of 3, a set of 2 and a single block in each row. I then pinned and then labled my rows.... now off to sew again.... and remind myself to not try and get to fancy and mess it up again.